Kids are from heaven - now on Kindle

Now on Kindle
read it on out Kindle, iPhone, iPad, iPod or online

There once was a farmer who discovered that he had lost his watch in the barn. It was no
ordinary watch because it had sentimental value for him. After searching high and low among
the hay for a long while; he gave up and enlisted the help of a group of children playing
outside the barn.

He promised them that the person who found it would be rewarded.

Hearing this, the children hurried inside the barn, went through and around the entire stack
of hay but still could not find the watch. Just when the farmer was about to give up looking
for his watch, a little boy went up to him and asked to be given another chance.

The farmer looked at him and thought, "Why not? After all, this kid looks sincere enough."

So the farmer sent the little boy back in the barn. After a while the little boy came out with
the watch in his hand! The farmer was both happy and surprised and so he asked the boy how he
succeeded where the rest had failed.

The boy replied, "I did nothing but sit on the ground and listen. In the silence, I heard the
ticking of the watch and just looked for it in that direction."

Kids are from heaven - paperback

and here it is: 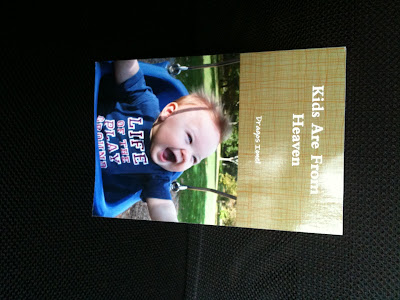 "Kids are from heaven" real book. As it is print-on-demand, I had to order it just like everybody else.

One would not believe that half a year of work will result in such a small book :-). I was expecting to have at least 300 pages.

A friend told me he couldn't write books and what would be the point anyway.

To write you need something to be passionate about and be crazy enough to believe you can change the world for the good.

And spend the time writing down how that can happen.

Grammar and style comes after that in importance.

And never think you will be successful (as most probably you will not). With 1 million new books every year, chances to win are similar to those winning a lottery.

He said he will stick to the lottery for now...